The city of the "Golden Gate Bridge"...perpetually enveloped in ethereal fog that dances around the Bay area in the mornings and nights, creating some of the most stunning photo vistas that any cityscape photographer can dream of.

Not surprisingly, the Bay area boasts of a high concentration of some of the most famous landscape/cityscape photogs in the US (the likes of Thomas Hawk, Joe Azure, Michael Bonocore, to name a few). I felt myself lucky to be in this beautiful city, on a part photo, part personal trip.

I started writing blogs of my photo trips about a year ago, primarily to remember (in future) the background of some of these trips, the circumstances in which they were sometimes undertaken and the memories associated with them. While most of my trips are purely photography related (I tend not to call them vacations because of the intense schedule and discipline I put myself on during these trips), it's the non-photography related trips (with a side of photography) that remain in memory longer and the photos special. This was one of them.

This would be my first outing with my new full frame Nikon, and the prospect of meeting a friend after 20 years, made this trip doubly significant.

Plans were made, locations were scouted out on the internet, times during the day slotted out for the 5-6 days I was going to be there. The weekend was going to be a long road trip to Death Valley with weekdays being spent in and around the city.

The flight to the west coast is about 6-7 hours and with no direct flights out of Toronto to San Francisco, air travel sucks up almost a full day out of the itinerary. Reached SFO around 9-9.30pm and after some well needed rest that night and the day after, the 1st night of travel involved my friend taking me to a fantastic location for viewing the bridge, Fort Point, a historic place with some old buildings and chained barricades that make it magical to take shots of during the nights. 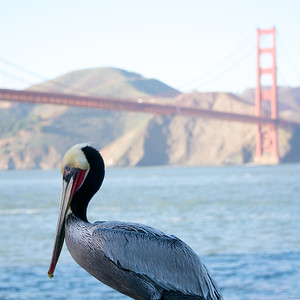 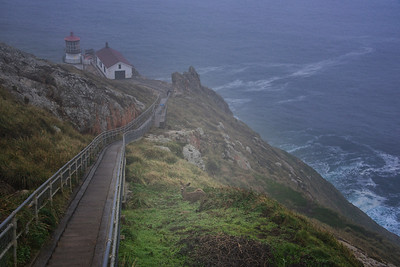 A bit of scouting around the city on Friday, some more research and valuable tips from my friend with his local knowledge, a few shots of the bridge and a quick visit to Point Reyes in Marin county. Point Reyes and the road that leads to it (Sir Francis Drake Blvd) is an absolute dream world, through fog enveloped forested roads, through historical & still functional ranches culminating in the most dreamy lighthouse you can ever find on the west coast. This was a location that was certainly not on my itinerary, but was a strong suggestion from my friend, so I went for it...and glad I did!

Monday, Tuesday & a bit of Wednesday were when I got to see the beauty of the city and the famed Pacific Coast Highway, not far from there. Monday was devoted to Highway 1 or the famous PCH as it is called.

The raging Pacific Ocean on one side of the cliff-hugging road and the Santa Lucia & Carmel highlands on the other, make PCH, one of the most scenic highways in the world (according to National Geographic where I first read about it many years ago). It had been a dream for long, to drive this highway between Monterey to Morro Bay which NG classifies as the most scenic stretch of the 198 kms highway. I did not manage to reach Morro Bay and missed a lot of photo ops in the gorgeous little towns (because of being extremely crowded and limitations on time), but the sheer thrill of driving on it was worth the whole trip.

My friend suggested to take the road through Half-Moon Bay to start of Hwy 1. And boy, I was glad I took that route! a breathtaking road to Hwy 1 that, within a few miles goes through pristine lakes, misty mountains & quaint country side towns.

After a few customary stops at the first couple of beaches, my first photo-op was Pigeon Point lighthouse, in the fore-drop of a serene field of yellow flowers. Then driving south, went through the towns of Santa Cruz, Monterey & Carmel-by-the-Sea. All beautiful little towns, but touristy and crowded. The mix of Spanish and Mexican cultures is quite self evident as well. Gulped down on some Mexican fare at one of the towns and continued on southwards, all the while gasping and gaping at the natural beauty on both sides of the highway.

Maritime/Coastal towns and life have a very different charm of their own and for some reason people there seem a bit more relaxed and carefree, as opposed to stressed out mainland city dwellers. My previous trips to the Atlantic side of the continent (New Brunswick, PEI & Nova Scotia) had the same flavour...albeit different cultures (French  & English).

But the scenes of limitless oceans and tiny insignificant humans living by its side, are a common theme across these coastal communities. My next stop was Pebble Beach, driving through some jaw dropping real estate properties & beaches of the rich and famous. Continued on to the famed Bixby bridge, a magnificent engineering structure (80 mts single span) in  Big Sur. Much photographed, I was lucky to squeeze my suv into the only parking spot available among the packed crowd busy taking shots of the bridge.

By this time it was late afternoon and after trying to figure out a good spot to take a few night shots on my way back, I headed further south for two of my last destinations, McWay Falls and Pfeiffer Beach.

Got a bit confused about the exact location of McWay Falls (between Pfeiffer Big Sur State Park & Julia Pfeiffer Burns State Park) and after a quick check at Big Sur State Park, finally got down to the spectacular McWay Falls, a thin yet tall falls falling directly into the Pacific Ocean, quite a sight to behold. Unfortunately the sunlight was too harsh and didn't get the perfect shots but enjoyed the view. 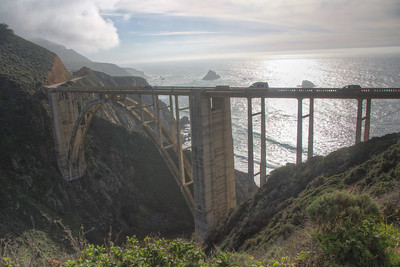 Seeing the sun close to setting on the horizon, I dashed back towards Big Sur, heading to Pfeiffer Beach, via Sycamore Canyon Road. Caught a glorious sunset on the rocks along the beach and from there finally made my way back to San Francisco, with a shot of Bixby Bridge at night on the way.

Next day was "The Bridge Day". From 5am in the morning to late evening, a non-stop extravaganza of Golden Gate bridge views from every possible spot I could find.

Starting from "Battery Spencer Point" for a real close-up view all the way to Slacker Hill for a panoramic down-the-hill shot in the midst of the famous Bay area fogs...and everything in between.

At 1.3 km long, this orange coloured suspension bridge has a magical quality to it that renders it so photogenic, perhaps a combination of fog, colour, location (near the Pacific Ocean on the Golden Gate Strait) & its proximity to such an important city of the US of A, connecting San Francisco with Marin County.

Next day morning, I did a quick dash to take a shot of the glorious 'Palace of Fine Arts" building before sunrise, before packing up and heading out to the airport.