Defining image of my weekend trip to Acadia National Park....though this image doesn't belong to the Park itself. A National Park where the boundaries between the wild and the domestic appear to have blended to such an extent, as to blur the divisions in a seamless dance of coexistence.

It was Victoria day long weekend and I was searching for a National Park that was within driving distance from Toronto. It's funny how my search perimeter has increased over the years. About 5-6 years ago, 200-300 km (one way) would be the max I would venture out to in my car...so a lot of my trips were to the beautiful lakes and cottage country north of Toronto, inside Ontario. Long solo drives, while having that raw feeling of adventure and independence to them...take a toll physically and can turn dangerous if one pushes it too far. And over the years while my distances have increased, my cautiousness, thankfully, has somewhat kept pace as well (timely breaks, not driving late in the nights etc). I guess the only trait that helps me naturally on these trips, is the fact that I'm a loner, have always been and probably always stay that way. And on this particular trip, at least while going to Acadia N.P, I decided to do an experiment on myself, to see just how far could this trait of mine be pushed...

Acadia N.P, from Toronto, is about 1,200 km and depending on which route you take, it's about 12-14 hrs of driving, not too much if you take an overnight break in between. While going I decided to drive through Quebec province and crossing over to Maine state, through their  small country/state roads. For the entire duration of the drive, I shut down my radio, no music, no news/weather forecasts, just the constant hum of my car's engine and myself. This is actually a dangerous thing to do, as all drivers would attest to...something that can hasten the onset of the the well known "highway hypnosis" syndrome. But as I discovered, it was doable for me. Required falling back on my spiritual practices of thought control and constant non-stop mental japa or chanting of my sacred guru-mantra, given by my spiritual preceptor, while I was still a teenager. So in essence, the theory is...you can actually turn even your most mundane activities into acts of meditation by constantly dwelling on a limited, and oftentimes, singular spiritual thought process. And when mental japa (chanting of a holy name) is done for a long enough time, it automatically becomes a powerful type of meditation. And as any religious text will attest to...when the mind goes into a meditative state, normal human cravings dwindle, like the need for company or distraction (in the form of music & chat) to keep the mind active and going. Even physical fatigue should practically come down as a result. I'm not saying that I managed to keep my mind focused 100% of the time I was driving, on the mantra chanting (7 hours to Sherbrooke, QC and then 5 hours to Acadia, ME) but I guess I managed to drive all that distance without burning out for lack of distraction, most possibly due to this experiment. Given that I did the non-stop 7-8 hours drive (with just a few minutes break for gas) to Sherbrooke immediately after a long day at work, I'm led to believe this experiment was efficacious. Worth trying out again...some other time.

While returning back, it was more a reflection of this whole experiment, reflections on religion, just how grotesquely it is practiced and preached in today's world versus what it truly is about. And while on this topic, an interesting thought came to mind that I had read somewhere, about some research done by someone, on the US's two most high-security prisons, especially the impact of solitary confinement and how prisoners in such cells try to cope, and in most cases breakdown, due to lack of human interaction/contact. Criminal justice system aside, the point that piqued my interest on this topic was...is it possible, if you are someone confined to a solitary cell with no outside/human contact, to survive on mind control & thought discipline alone? I think it is. 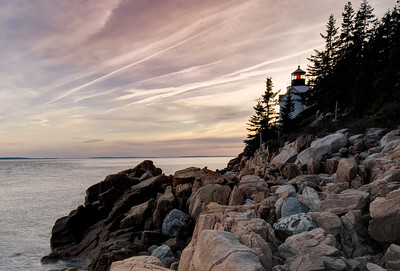 Acadia N.P is one of the smaller parks in the famed US National Parks network, but is one of the most popular, with summer & fall months, reportedly, overflowing & gridlocking, with visitors. So timing wise, I probably chose the right time, just before the busy season started. As usual, stayed at a motel just on the park entrance and over the next few days, made repeated forays into the heart of the park. The park is basically a large section of the Mount Desert Island (and a few islands off this main island) on rocky coastal Maine.

From rocky mountain tops (peaking at the domed Cadillac summit) to sandy beaches and spruce-fir forests, it is one of those parks that has it all, except waterfalls...just a couple that are more or less dry most of the year. The rocks at Acadia, mostly granite, have a peculiar pink tinge to them, due to the presence of pink feldspar. This makes for some really interesting photo-ops during early mornings and late afternoons (when the sun is at a low angle) if you manage to keep a good section of the rocks in your frame, photographically speaking.

Another queer and funny thing any first time visitor to Acadia will notice, is the names of the places around the island. Some of them are so simplistic, you would wonder they were named by a little kid, or an adult whose motto was that of uncharacteristic blandness. For example, a really gorgeous upscale harbour named "Ship Harbour", in case you had any doubts as to what you would encounter at a harbour.

A rather big and longish lake called "Long Pond". And a nice beach (no points for guessing its name) called "Sand Beach". I guess the initial pioneers who discovered and settled down here, wanted to keep everything straight and simple.

Photographers are a weird bunch, at least from the general person's perspective. Getting up at the 'wrong' hours of the day (yeah, my daily pre-dawn wake-up schedule does come in handy during these photo-trips), relaxing when everyone is out and sightseeing (spend the middays either in my room or having lunch followed by a little siesta) just because the 'light' is not as good as during the golden hours, or indulging in strange and outright creepy behaviour, like out on a beach alone, in pitch darkness in the middle of the night...to catch a clear starry night sky on frame...yep, they are different.

I rarely ever get clear moonless skies while on my trips, but on this trip I was lucky to get one such night and decided to go check out the "Sand Beach" for a night sky shot. Both, taking such shots and post-processing them, are a bit challenging but I guess as I take more of these, I will learn and perfect them over time.

A good thing about National Parks management, across the US and Canada, is that more and more parks in the network are being turned into "Dark Sky" areas, with technology and smart systems slowly enabling minimal usage of lights within core areas of the parks.

Time was, when we were kids, we could see the milky way from within a city. But nowadays, those kind of night sky views are almost gone, so we have to travel to the countryside and such parks to witness them.

With rains forecast on the second day, I decided to check out the unique 'Carriage Roads' that run through the park. 45 miles of them (all donated by John D Rockefeller Jr & his family who had them built) run through the park. With interesting stone bridges and streams and even a waterfall (though dry at this time of the year) along the way, some of the sections are truly breathtaking. 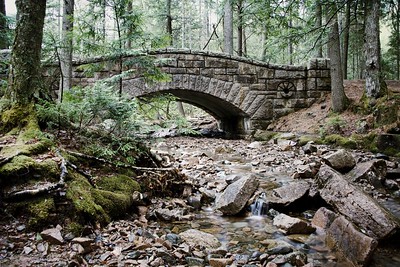 With it's unique north-eastern location, Maine and Acadia N.P gets the privilege of witnessing the sun rise every morning, about 2-3 minutes before any other state in the United States. I was lucky to witness not one but several gorgeous sunrises, from various vantage points in the park, from the summit of Cadillac mountain, along southwest harbour and en route to the Bass Harbour lighthouse.

Some people ask me why I'm obsessed with sunrises (as opposed to sunsets, which I like too) and the answer is simple. It's a safety and convenience thing. Best times to capture colour are ~1-2 hours before sunrise and ~1-2 hours after sunset. Given these time periods, it is easier to do a sunrise shot if you are hiking up to a difficult spot to view it. At least the return hike, when you are eager to get back and fast, is not in the dark (as in the case of a sunset).

As a matter of planning I usually choose beforehand, some of the key areas, spots that I want to cover, as a must-do. Anything that I see beyond that is a bonus.

My last morning was spent on top of Cadillac mountain looking out into Frenchman Bay and the Atlantic Ocean with the sun rising from the east. And finally it was time to say goodbye to another beautiful national park and head home, this time taking a different route, heading south towards Boston and then east to Toronto, via 4 states & 1 province, Maine, New Hampshire, Massachusetts, New York & Ontario.

For a few more pics from the park, click on the link below